Activists published a new magazine as a campaign for more tolerance and enlightenment in Uganda. This is not an easy undertaking in a land, in which hate and prejudices are widely distributed.

To speak for the many voiceless

It just looks like all the other normal magazines which you can buy in every store. But ‘Bombastic’ isn’t a normal magazine. It’s the first LGBTI magazine in sub-Saharan Africa. Since last month, volunteers have been distributing the free magazine to the LGBTI community. At the same time, the radio station ‘Kuchu’ (translated Gay or Queen) went on air.
The magazine features homosexual and transgender people who talk about their experiences, wishes and life in Uganda. It is supposed to enlighten and to reduce prejudices. The aim of the people behind ‘Bombastic’ is to speak for the many voiceless Ugandan LGBTI and to share their stories. They receive financial aid from Ugandans homosexuals and also foreign sympathizers.

Against the stream for more tolerance

The organizers and supporters of ‘Bombastic’ know that the government and the church haven’t been waiting for a gay magazine. Neither public burnings of issues nor the threat of arrests are enough to prevent them to continue with the magazine.

Homophobia is like part of the society in Uganda. Policy and society are not the only one who demonstrate their aversion for the LGBTI minority, the media are also openly hostile towards gay people. ‘Bombastic came about because we wanted to put right many of the falsehoods spread by the Ugandan media, which regularly publish against, humiliates and degrades homosexuals,’ said Kasha Jacqueline Nabagesera, human rights activist.

‘I rest my case, rest in peace David Kato’

The magazine also remembers one of the most popular gay activists in Uganda – David Kato. He is regarded as the founder of the Ugandan LGBTI movement and was the speaker of the human rights organization ‘ Sexual Minorities Uganda’. His open intercourse with his own homosexuality and his relentless effort for more tolerance made Kato a target of hostilities and police arbitrariness.
Kato was critically injured with a hammer in his own house on January 26, in 2011. He died on the way to the hospital. 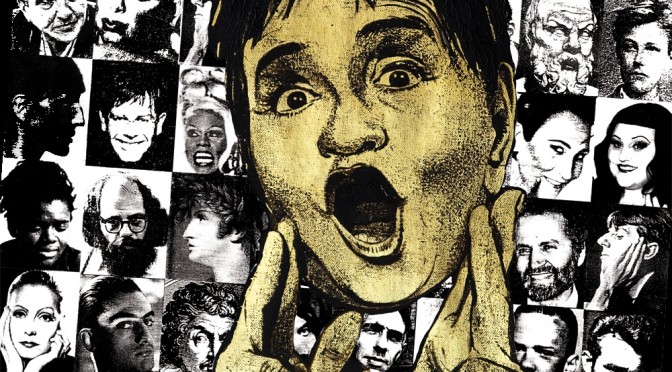 The dancer Valeska Gert was a star in the 1920’s and 1930’s. This not only at home in Berlin: She was known in Europe, Moscow and the United States through her tours and emigration. Valeska Gert was an artist of formidable modernity. Her avant-garde dance solos were far beyond their time and would influence the decades to follow.

Valeska Gert was born in Berlin in 1892 and lived with her parents at Köpenicker Straße. She was already taking dance lessons at the age of five and at 16, acting classes. Shortly after her 1916 debut as a dancer, she achieved celebrity: In eccentric dance pantomimes, Gert analyzed subjects like boxing, nervousness, bawds, politicians and prostitution, consistently embodying all their diversity in a single unity. These performances ended up making her a notorious star. In the 1920’s, she conceived even more radical dance pieces such as Death: a dance on a person’s final breaths consisting nearly entirely of motionlessness, so radical as to be unique amongst modern dance and performance of its time. She even performed the young medium film in the 1920’s, dancing time-lapse, slow-motion and cuts herself, the latter as modern street traffic.

In the year 1925, Gert herself appeared for the first time in silent film: In Hans Neumann’s parody of A Midsummer Night’s Dream, she played Puck. Then Georg Wilhelm Pabst cast her as a corrupt bawd in Joyless Street (1925). In 1929, she lit up the screen in Pabst’s Diary of a Lost Woman as the sadistic head of a home for fallen girls. More than any others, the scenes with Valeska Gert stick in the viewer’s mind: While directing her scantily clad wards in gymnastics, beating a gong to keep time, Gert sends herself into a fearsome ecstasy which ends in a veritable orgasm. Her fame and recognition grew even more when she appeared as Mrs. Peachum in The Three-Penny Opera, also directed by Pabst.

Banned from performing in Germany from 1933 on as an avant-garde artist and Jew, Valeska Gert emigrated. After England and other places, she went to the USA in 1939. In 1941, she opened Beggar Bar in New York, a combination of cabaret and restaurant, which had to be closed again in 1945 because of licensing requirements. She implemented the wildest ideas in her bar to offer something counter to life’s adversities. She set out her own handmade table decorations, painted the walls herself and used candles instead of lamps. On the first evening, the cellar bar was already packed. Among others, Kadidja Wedekind performed there doing recitations of her father, Frank Wedekind’s poetry. One of Gert’s staff was Tennessee Williams, who would later become a world-famous playwright. Williams also read his own poems there. Judith Malina worked at the coat-check before going on to fame in Living Theater.

In 1947, Gert returned to Europe. After stops in Paris and Zürich, where she opened the cabaret Café Valeska und ihr Küchenpersonal (Café Valeska and her Kitchen Personnel), Gert travelled back to Berlin. It was 1949 and Berlin was under blockade. There, she opened the cabaret Bei Valeska (Valeska’s), and then Hexenküche (Witches Kitchen) the year after, hiring the young Klaus Kinski. At the Hexenküche, she herself played the concentration camp commandeuse Ilse Koch, a woman infamous for her cruelty. A bar decorated with hay followed: Ziegenstall (Goat Stall) opened at Kampen on the North Sea island Sylt in the year 1951. Once again, the servers were responsible for seeing to the guests’ creature comforts as well as their entertainment. But Valeska Gert never performed there herself.

Federico Fellini cast her in the film Juliet of the Spirits in 1965. Clad in a white wig, she took on the role of a factotum. On 28 June 1970, she was awarded the Filmband in Gold for her outstanding lifetime achievement in German cinema. She played in R.W. Fassbinder’s TV mini-series Eight Hours are Not a Day in 1973 and Volker Schlöndorff’s film Coup de Grâce in 1976. Werner Herzog had cast her in his remake of the Murnau classic Nosferatu (1978), but she died before filming could begin.

Valeska Gert was buried in Berlin, the city where she was born and the city she loved best, at the Ruhleben cemetery. Her autograph is engraved in pink on the black headstone.

A portrait of Valeska Gert is the centerpiece of the 28th TEDDY AWARD poster art. The poster was designed by Jonny Abbate. Artwork from the series “GOLDEN QUEERS” by Rinaldo Hopf.