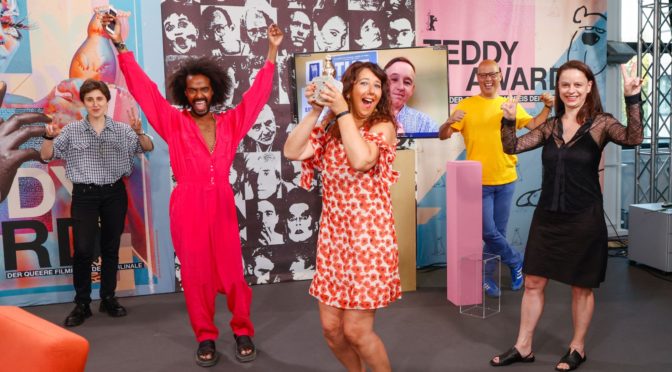 The moment we’ve all been waiting for has finally arrived. Our jury has chosen the winners of this year’s TEDDY awards! We’re incredibly happy to present you the following films. And for all those who missed the livestream, here is the ceremony as video on demand

Jury Statement:
This creative documentary is the story of a gay man, Miguel, exiled from Lebanon to Spain in the ’80. The strong emotional impact of the film is provoked by the alchemy of both the sharpness of the filmmaker and the genuinity of the protagonist. The excellence of the editing, made of multiple layers – formal and narrative – is an impressive art of the language of cinema to investigate recollection of a gay man who faced traumas, caused by war, xenophobia and homophobia. The extra-ordinary form empowers the storytelling to shine out as an honest self-confrontation with a strong universality regarding being queer, feeling guilty, family, love, migration and self-exile. The whole becomes a mutual experience to share: we are reminded of the power in longing for a queer redemption. If you want to tell a story, tell it like Miguel’s War. You can watch the interview with Eliane Raheb below:

Jury Statement: This immersive documentary highlights a dramatic situation, which would have stayed untold: the one of Alexander (a Trans man) and his wife Mari in Georgia. The narrative focused on the project of the young couple to escape the oppressive and repressive social and political context. For its intricate way of bringing the urgencies of the Georgian queer community though a personal journey, Instructions for Survival offers both the subjectivity of queer kinship and the cost of being oneself in world that demands your sacrifice rather than letting you be who you are. It shines out not just for its importance for the queer community in Georgia as being a simple and strong survival story, but also with its rather conventional but strikingly direct structure, a sensitive aesthetic and a consistent approach. It is an eyeful success that the camera follows the daily life of the couple very closely over the years by not being intrusive. The film is an essential act of militancy that reminds us with power, that personal is political. The jury hopes that the journey of both Alex and Marie and the film itself be with more and more achievements. You can watch the interview with the director
Yana Ugrekhelidze below:

Jury Statement: For its unique and poetic approach to filmmaking during a global crisis, International Dawn Chorus Day reminds us that film, as medium, perhaps is the best way to document the past, the present and
the future. Made of trivial video shootings material and a terrific creative idea, the film succeeds in being highly militant and shaking the audience. It raises unique voices to express the common political issues of queer people via the most popular communication tool during a pandemic. Using a surprising and original dramaturgy, that leads the audience to an unexpected point, this short film is a pure masterpiece. It represents a creative, fun and beautifully crafted way of making us remember those who continue to pay the highest price for queer people’s freedom. You can watch the interview with the director below: