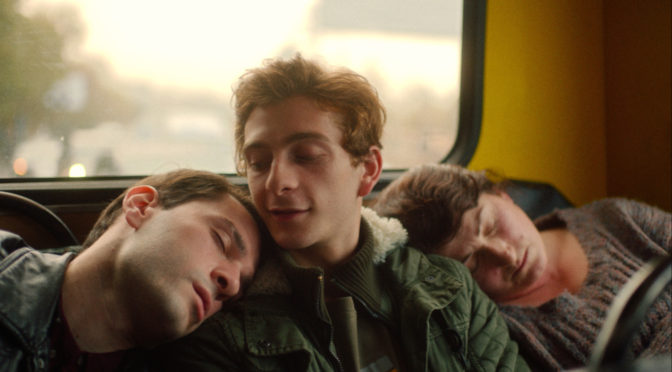 No idea what film to watch as you are patiently counting down the minutes until our TEDDY Films 2021 will be screened in summer? That’s where our Writers’ Challenge 2021 winner comes in!

Krzysztof Dubicki writes about his favourite queer film AND THEN WE DANCED (2019), directed by Levan Akin.

“Cinema knows a lot of love stories with the art of dance as a beautiful background to the core of the human connection, passion and excitement. Where there are devotion and dedication there are emotions and feelings. Some of them – like love – can take us to the sky and some of them – like a heartache – can make us melancholic and full of grief.

Levan Akin tells a moving story of Merab and Irakli, two Georgian male dancers from the Georgian dance school and their passionate way to discover their feelings for each other. As a background to the love elation, the director shows us amazing images of Tbilisi, the country’s culture and family’s connection and respect for the country and the traditional Georgian dance, that makes this film so unique and graceful, but also really masculine and strong. Scenes, where this dance is being performed, are just a delight. Especially that they are spiced with the amazing sound of Georgian music, that takes a spectator to the journey inside the tradition and folklore.

Merab (played by amazingly good Levan Gelbakhiani) is intensively training with his girlfriend wannabe, Mary to get into the National Georgian Ensemble, being focused on his future and achieving perfection. His steady mindset is being interrupted by the arrival of Irakli (in this role a very charismatic and handsome Bachi Valishvili), who becomes not only his rival during the dance classes but also an object of Merab’s affection and distraction. The mix of sensuality and masculine energy of the dance brings boys together as they are both starting to discover the lust towards each other. Conservative climate of the country and approach towards LGBT communities in Georgia creates a lot of hate towards gay people. It pushes them, to hide their true identities and live their life the way they are expected to. Merab’s love for Irakli (which feels like his first-ever true love) helps him realize who he truly is. The intensity of feelings towards someone, who has become his secret lover brings a lot of excitement but also confusion and drama, that affect this young boy’s broken heart.

This film is a great and successful (24 awards and 21 nominations worldwide) representation of Queer cinema. Yes, it does have a bittersweet ending and for some, it might be a cliché of another dramatic and sad gay story, but these kinds of stories actually happen. Especially for the younger generation of people trying to find their true self in the world that is not accepting them. Akin’s world is full of cheerful and ‘Coming of Age’ moments, that works perfectly in this movie. With the mix of folk and pop soundtrack vibes and great acting full of chemistry and honesty, this piece is an extraordinary work from the hands of a true artist. Just like the dance, which is so easy to lose yourself, it is equally easy to get lost in the charm and magic of this irresistible story.”

Congratulations to our winner Krzysztof for his wonderful film review!

Now you know which film to watch next. Check out the trailer below and see for yourselves…