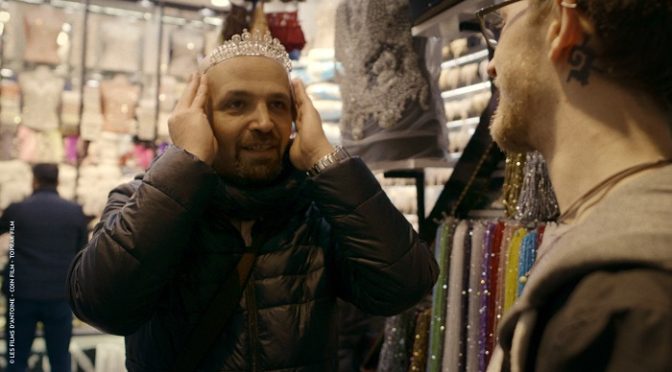 “I don’t see myself as a gay refugee”

These are the words Mahmoud Hassino casually remarks just minutes into our conversation. Oscar and I look quizzical: this is the man who’s made a name for himself by founding the first gay Syrian blog Mawaleh, starring in the documentary Mr Gay Syria, and fighting tirelessly for LGBT and refugee rights. How is it, then, that he can so easily shed the term ‘gay’ when that forms such a significant basis for the activism upon which his right to asylum rests? The answer is that this is not a denial of gay identity, but an empowered decision choose one’s own labels, rather than have them imposed: “homosexuality is just some thing, some part of my identity… we have many ways of introducing ourselves; I can say a journalist or blogger or writer. Sometimes you choose something that is more necessary.”

He expands on this, recalling his time still living in Damascus, when protests against the regime of Bashar al-Assad broke out, and stressing that this was a time when the label of ‘gay’ was very much necessary: “when [the demonstrations in Syria] started, whenever I was introducing myself to someone I was like “‘Hello, I’m Mahmoud, I’m gay’”. It was very important to highlight that homosexuals also need this regime changed… Now I don’t find it necessary to mention this sexual orientation. It is available, people know, but now I think ‘I’m a refugee in Germany’”. The decision to highlight particular aspects of an identity is part of what he calls “learning how to use labels”, using identity politics “to advocate for something”. It represents a power struggle at the site of linguistic terms, and is indicative of the wider importance Mahmoud places on language as a means for marginalised individuals to assert and express an identity. Raised in Saudi Arabia, a student in Syria, and a refugee first in Turkey and now Berlin, Mahmoud’s life story is one of endless transition. With this constant geographical migration comes the need to locate an identity within a plethora of different languages and cultures, some more accommodating than others. His own process of asylum was, indeed, deeply bound up in the issue of language. Whilst homosexuality and gender identity is a legal basis for asylum in the EU since 2011, from Mahmoud’s experiences and those of his clients, the interviews necessary to apply for asylum lack guidelines. Two EU directives, both from 2013, obligate EU Member States to train asylum staff and to provide for adequate reception conditions for LGBT people, though only a few Member States have specific national guidelines for interviewing LGBT persons. In practice, many conducting and translating these interviews are ill equipped with the vocabulary and sensitivity needed to discuss LGBT identity.

Mahmoud remembers his own interview, in which he described his sexual orientation: when he first explained to a male translator that he was gay, the translator’s replied, “what is that?”, before walking away without explanation. With the next translator, this time a woman, he tried in Arabic (“Mithlī”), then English (“homosexual”), and eventually in German (“schwul”). Her pertinent response, once she had finally understood his meaning, was to remark that “you don’t look like one”.

Not only are there blanks in the vocabulary and awareness of LGBT identity among translators and bureaucrats, but also among many asylum-seekers. Mahmoud explains that in countries where there’s little visibility of- or tolerance for- homosexuality, some people might not identify with the quite ‘westernised’ terms ‘gay’, ‘lesbian’ or ‘trans’. As well as this, structures of privilege operate within the LGBT community, meaning that “even gay men benefit from the patriarchy” in asylum interviews, often being subject to far less invasive questions than, for instance, a trans woman. Mahmoud’s own work with translators, in tandem with his involvement with the Schwulenberatung – a support group in Berlin providing counselling, medical advice and accommodation to LGBT people, including refugees –  is part of a commitment to providing the necessary language and communication for refugees of all gender and sexual identification.

The difficulties of linguistic identification and expression at the stage of asylum continue into the process of integration. How does one begin to convey the experience of emotional, physical and geographical upheaval involved in asylum-seeking in a language that is not their own, and which is often used as a means to demean, condescend and exclude the refugee community? Mahmoud sites the phrase often used by Europeans to refugees: “oh, but at least you’re safe now”. He becomes increasingly incensed, demanding “Define safety. What is safety to you? Define safe from your perspective and you will realise people here with refugee status don’t have it. They live in continuous fear”. He points out that even when a refugee arrives in a supposedly ‘safe’ country, under the Syrian Subsidiary Protection laws the refugee status can be revoked at any time within three years. The word ‘safe’, and language in general, is as migrant as the people using it. Meanings shift according to individual experiences, and for a refugee like Mahmoud, that “baggage” of experiences, “it’s not easy to get rid of”. When words fail, Mahmoud turns to laughter; he is good-humoured and brimming with jokes, despite the often-sombre topics we discuss. It seems to be his way of overcoming the hurt of racist and homophobic verbal abuse, and transcending the struggles of linguistic and social belonging.

Mahmoud’s activism began with the written language, having founded Syria’s first LGBT online magazine. But he’s since turned to the medium of film to present the experiences of LGBT refugees. The documentary Mr. Gay Syria, directed by Turkish filmmaker Ayşe Toprak, follows Mahmoud and fellow Syrian Hussein, as they attempt to participate in an international beauty contest. What were Mahmoud’s motivations behind the documentary, then? “Visibility. I’m tired of people googling ‘gay Syria’ and my name coming up. That’s all”. Those intentions have certainly been met; the film has significantly raised the profile of Syrian gay identity, and has been met with widespread success. It has been awarded the Grand Prix at the Festival Chéries-Chéris Paris, Best European Documentary at the Tirana Film Festival and Best Human Rights Film at the Verzio Film Festival in Hungary. The idea came to him from a jovial Twitter exchange with the organiser of the Mr Gay World competition, and it took some persuasion to get Ayşe to run with the idea. Funding, too, was a huge obstacle: “Nobody was willing to fund a Syrian film with LGBTQ focus. There is this structural racism within funding bodies”, Mahmoud explains. A film that takes place outside Europe, with Syrian protagonists and headed by a female, Turkish director unsurprisingly fell foul to the Eurocentrism, racism and misogyny that is sadly rife in the film industry.

Does he think funding trends might change in the wake of Mr Gay Syria’s success? His answer is unequivocal: “If Ayşe tries to make another documentary she’ll have the same problems”. In this year’s Berlinale programme there currently stands just one film depicting the lives of refugees – Zentralflughafen THF, which follows the experiences of those living in the temporary accommodation at Berlin’s Tempelhof airport – and it is indeed male-directed and Europe-set. That’s not to do any discredit to the film, but simply to illustrate Mahmoud’s point. Just as LGBT refugees face an endless battle to feel at home within, and identifiable by, a spoken language, so too are they met with the challenge of being represented by the visual language of film. Mr Gay Syria will be screening in Berlin in March – simply the process of watching it would be a step towards recognising the unique language of LGBT refugee cinema.

By Hannah Congdon and Oscar Holzwart