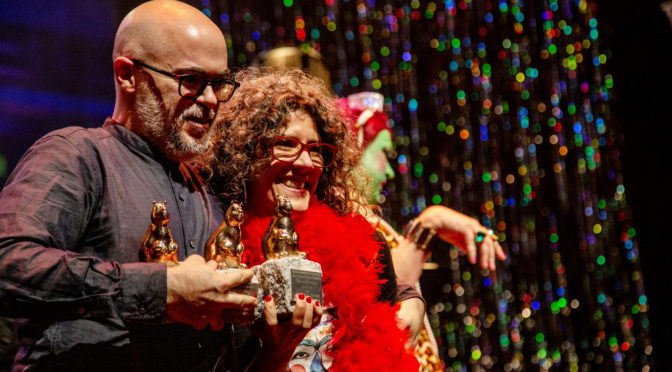 And the winner is…
The TEDDY AWARD Winners 2019 are in!

Jury Statement:
The TEDDY AWARD 2019 for Best Fiction Film goes to a film that goes beyond genre limitations. Centered on friendships, loyalty, and acceptance, that so many of us find in our communities. It’s a charming and refreshing tale of a band of outsiders and is infused with the heart and the warmth that will carry us through times of internal division and outside pressure and that is so much needed today.
The TEDDY AWARD winner 2019 for Best Feature Film is A BRIEF STORY OF THE GREEN PLANET / BREVE HISTORIA DEL PLANETA VERDE by Santiago Loca.

Jury Statement:
This film gives life to an artist that survived and resist the repressive dictatorship and spoke for the rights of not just queer, but all minorities attacked and silenced in his country. It brings out the importance of resistance during this time where we see voices across the globe being muted. This film is also creative in the use of the archival footage and proximity of the director to achieve an intimate portrayal of a persona that the world need to recognize.

Jury Statement:
Surreal, hypnotic and fresh; this is a fun short that explores sexuality and queer relationships. Part of a new wave that draws from science fiction and traditional Hungarian animation, the winner of the TEDDY short film prize is ENTROPIA.

A Dog Barking at the Moon by Xiang Zi

Jury Statement:
We are happy to award the special jury prize to a film in which form and content work on many levels to tell a complex and contemporary family story. We were impressed with the performances; the assured yet inquisitive script; confident, non-linear relating of the past and present; and the careful blending of the psychological and the political.
Created under intense political scrutiny, yet with the creative nous to avoid censorship, the winner of the special jury prize 2019 is A DOG BARKING AT THE MOON.

Jury Statement:
BREVE HISTORIA DEL PLANETA VERDE is young, freshening, creative cinema far away from the conventions of a genre or narrative. The film deals uses a slight portion of humour to deal with topics such as queer friendship, solidarity and acceptance. Queerness is displayed entirely natural and not – which is still common today – only full of problems. The alien works as a multilayered and very queer being and as such contains a strong and powerful symbolism. “I know they exist but I have never seen one” says one person about the alien – a sentence very often said about queer people. All that makes BREVE HISTORIA DEL PLANETA VERDE a queer movie of high importance for the community itself but also for the whole society. We want to watch more such movies!

The Special TEDDY Award this year goes to Falk Richter.