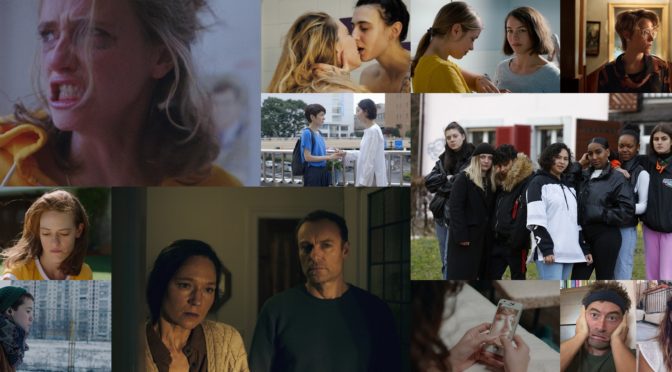 Jan and Nina travel with their two children to their weekend home on the Belgian coast to find some peace and quiet. But this is ruined by a mysterious break-in when the family arrives. Afterwards, Nina has a bloody nose and Zorro, their son Max’s pet rat, has disappeared. What happened? None of them is able to give the police a clear description of the intruders. Back in Germany, the successful advertising agency that this bilingual couple runs together becomes the target of a paint bomb attack. Jan had previously made the single-handed decision to take on the election campaign for a political party with populist tendencies… more

As with the rest of his oeuvre, duplication and mirroring of female characters once again informs Ryusuke Hamaguchi’s latest work, Guzen to sozo. It would not be out of place to make a literary analogy and, if one were to regard his two previous films (Happy Hour and Asako I & II) as novels, this new work could be described as a collection of short stories. The film’s recurring rhythm amplifies this effect. The three episodes, which each revolve around a woman, are in turn divided into three movements, like a piece of music. They tell stories of an unexpected love triangle, a failed seduction trap, and an encounter that results from a misunderstanding… more

Belgrade in 1993. Serbia is at war, people are suffering on account of sanctions and inflation, but everyone is doing what they can. Mother Marijana is holding the family together. Her husband only raises his gaze from the floor when loving moments with his young daughter Minja brighten an endless string of daily chores. It is Minja’s eighth birthday. Instead of a cocker spaniel of her own, there’s the neighbour’s three-legged dog to play with, and the cake has been made with margarine instead of butter. In the living room, she and her classmates leap about dressed up as Ninja Turtles while the adults congregate in the kitchen. An ex-girlfriend rubs her new relationship in her ex’s face, there are heated discussions about who is to blame for the collapse of Yugoslavia and they all agree that it doesn’t take more than a bit of sperm to become a mother… more

“Who are you?” – “The queen of punks, in the land of pain in the ass.”
Seven girls live under the same roof but haven’t chosen each other, just like a family. Emerging from difficult backgrounds, here in the safe house, the girls find a new community, in a way they’d never experienced before. They are sharing joy and pain, passionately rebel against the shortcomings of their surrounding – the young women’s temperaments are different, their lust for life large, their place in society too precarious for things to be all peace, love and harmony. Home director Lora is always there for them when­­­­­ they need her. Or is it the other way around? …more

When Adam’s husband surprises him with weekly Spanish lessons, he’s unsure about where or how this new element will fit into his well-structured life. However, when an unexpected tragedy turns his life upside down, Adam decides to carry on with the lessons and develops a complicated emotional bond with his Spanish teacher, Cariño. But do you really know someone just because you’ve experienced a traumatic moment with them? more

Danny is pregnant by Max but she doesn’t get around to telling him at a party. Meanwhile, Max is busy trying out his girlfriend Avishag’s sexual fantasies with her. She wants him to hit her when they have sex. Avishag takes her bruises over to Dror, whose dog she sits. A familiarity develops between the older man and the young woman that neither of them expected… more

“They say when you get goosebumps, your soul touches your body.”
It‘s Masha, Iana and Senia‘s last but one year of high school. Among the thriving pot plants in the classroom and to the sound effects of a Biology lesson about physical signs of stress, the young protagonists grapple with themselves and with one another. 16-year-old Masha is the quiet center of Kateryna Gornostai’s feature debut. Steering clear of both simplified narratives and overly simplistic psychology, the film depicts her as introverted, sensitive and in love with Sasha, another classmate whose aloofness and passivity she finds a perpetual challenge. When Masha is dancing alone in her room at night…more