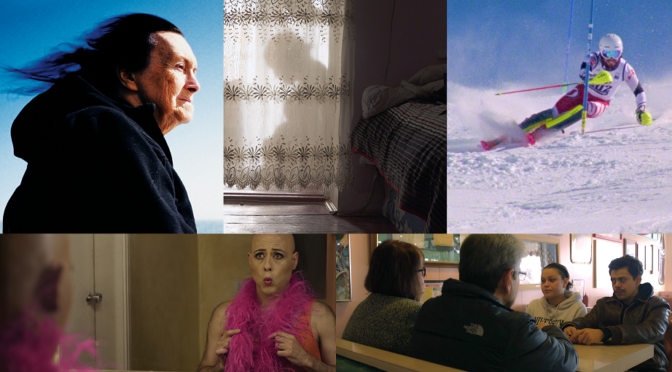 There’s a monster in the Nahuel Huapi Lake. In the twilight, it spreads itself out across the surface of the water like a taut cowhide, grasping at its victims with sharp claws. Another monster also lurks in the surroundings of the lake, which is close to Bariloche in the Argentine Andes. It is called Capa Negra: the Black Cape. It haunts the ski slopes by night and should be avoided at all costs.
Monsters from the legends of the Mapuche find their way into Manque La Banca’s feature-length debut Esquí via various twists and turns. Once there, they interact with the film’s other characters… more

Monika Treut’s Gendernauts was one of the first films to portray the transgender movement in San Francisco. Twenty years after the film screened in Panorama in 1999, Treut seeks out the pioneers of that time. What has changed? How have the lives of the protagonists evolved? San Francisco was once, as Annie Sprinkle puts it, the “clitoris of the USA”, but today the tech industry has a firm grip on the city. Aggressive gentrification has displaced the genderqueer community of yesteryear. Under the Trump administration, hard-won transgender rights are under massive pressure… more

Alexander’s transgender identity means he is obliged to lead a life of secrecy in his home country. Being identified as “female” in his passport means he cannot legally find work, either. Since even a visit to the doctor is a risk for him, he has begun hormone therapy to transition on his own with support from internet forums and the local transgender community. Desperate to escape their hopeless situation and leave the country, Alexander’s wife Mari decides to become a surrogate mother for 12,000 dollars. But their ostensibly pragmatic plan backfires… more

In this portrait that is multi-layered both in terms of form and content, a gay man confronts the ghosts of his past and explores hidden longings, unrequited love and tormenting feelings of guilt. Miguel was born in 1963 to a conservative, Catholic Lebanese father and an authoritarian mother from a wealthy Syrian family. Numerous conflicts over his national, religious and sexual identity compelled him to flee to Spain in his early twenties. In post-Franco Madrid where he lived an openly gay existence, his life resembled one long Almodóvarian orgy, full of excess and sexual taboo-breaking. This was followed first by a collapse and then a new beginning… more

Three years after the unexplained death of his niece Kalla, artist and filmmaker Angelo Madsen Minax returns to his Mormon family’s home in the small town in Michigan where his father’s sawmill is located. His sister Jesse, who had found temporary stability as a mother after a difficult youth and addiction problems, is suspected by the authorities of being responsible, along with her partner David, for the death of their daughter Kalla… more